For those of you too young to remember the game, it was a very simple premise, but proved to be a very difficult task. There would be a very detailed image with hundreds if not thousands of people in a public setting, and somewhere in that crowd would be a guy in a red and white striped shirt and beanie hat. Your mission, if you chose to accept it, was to find Waldo. 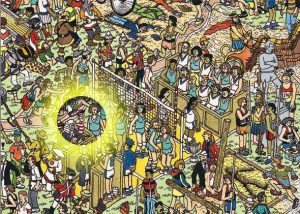 My new job at the printing company turned out to be primarily about the IT work, and only secondarily about One Thing Lean (getting websites developed pays bills now, making things leaner takes time to help pay bills in the future). But, no matter what I was focusing on, I always kept an eye out for the elusive constraint, the One Thing That Can Affect Everything.

At the printing company, the WIP seemed to be moving around (at least Waldo stayed put), one day it was in front of the Offset Press, the next day it might be in front of the Digital Press, and another day it might be in some area of the Bindery. Then one of the offset presses went down, and ended up being down for over three weeks before we could get the appropriate parts and get it repaired. After a week of no 2 color offset press, the Pressman fired up an old 2 color press that had been replaced by the much newer, much more sophisticated, but now broken 2 color press, and pushed some of the jobs to that old 2 color press, and some to the 4 color press.

At the end of that 3 weeks of the 2 color press being down, I don’t think we had a single job that was late (or no later than we would have been had the 2 color offset press was not down). Apparently the offset press was not the constraint. Then the Digital Press went down, and was down for over a week (turned out that this was not uncommon, not uncommon at all). Again, some jobs were pushed to one of the offset presses, some were outsourced to the local university, and again, we were not late on anything.

After months of observing the entire production process, I felt like I was chasing a moving target. The constraint seemed to be roaming throughout the shop floor, and WIP, when in it’s earliest form at a print shop (Job Tickets) is a little harder to spot than when it is piles of wooden parts on carts or in bins. 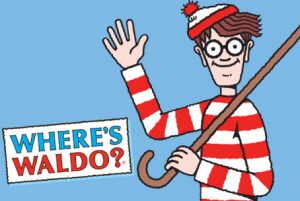 Turns out that what appeared to be roaming constraints were simply multiple policy constraints. Policies, written, spoken and unspoken about batching similar/like products (when you run envelopes, pull other envelope jobs forward in the queue into a large batch to save cleanup and changeover time). I was never able to convince anyone at the print company that batching was bad (really didn’t try that hard to persuade them, just some gentle nudges, which apparently are not very effective). What I did learn was a new lesson in Theory of Constraints, that large batches can present themselves as constraints, and ultimately mask the real constraint (I was looking in all the wrong places, which sounds a lot like a song).

I bet you’re beginning to wonder if I ever found Waldo, I mean the Constraint. The simple answer to that question is yes, and I’m going to tell you all about it in my next One Thing Lean blog post.

To make sure you won’t miss my “I Found Waldo” post, enter your name and email address in the Subscribe field on the right, and each time I add to this discussion, you will automatically be notified. Oh, and you won’t hurt my feelings if, depending on where you are seeing this, you Share, Like, Plus or Re-tweet it.